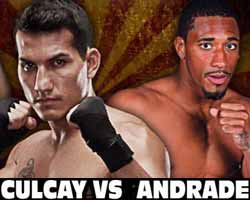 Review by AllTheBestFights.com: 2017-03-11, pretty good fight between Demetrius Andrade and Jack Culcay: it gets three stars.

The former Wbo light-Mw champion Demetrius Andrade entered this fight with a perfect record of 23-0-0 (16 knockouts) and he is ranked as the No.5 super welterweight in the world (currently the #1 in this division is Saul ‘Canelo’ Alvarez). He fought just once last year beating Willie Nelson (=Andrade vs Nelson).
His opponent, the Wba light-Mw champion Jack Culcay, has a boxing record of 22-1-0 (11 knockouts) and he entered as the No.13 in the same weight class. He suffered his only loss (via split decision) when he faced Guido Nicolas Pitto in 2013 (=Culcay vs Pitto), after this bout he has won seven fights taking revenge on Pitto (=Culcay vs Pitto 2) and defeating Jean Carlos Prada in 2016 (=Culcay vs Prada). Jack Culcay vs Demetrius Andrade is valid for the WBA World super welterweight title. Watch the video and rate this fight!