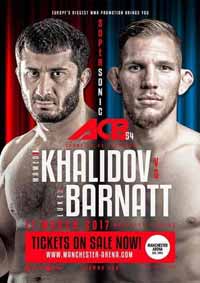 The black belt in karate, tae-kwon-do and KSW champion in two weight classes Mamed Khalidov entered this fight with a professional mma record of 32-4-2 (91% finishing rate) and he is ranked as the No.11 middleweight in the world. He suffered his last loss when he faced Jorge Santiago in 2010, since then he has collected 12 victories and one draw beating Aziz Karaoglu in 2016 (=Khalidov vs Karaoglu).
His opponent, Luke Barnatt, has an official record of 12-3-0 (83% finishing rate) and he entered as the No.61 light heavyweight. He suffered three consecutive defeats in the Ufc between 2014 and 2015, the last one with Mark Munoz (=Munoz vs Barnatt), but then he has won four bouts. Mamed Khalidov vs Luke Barnatt is the main event of Absolute Championship Berkut 54. Watch the video and rate this fight!