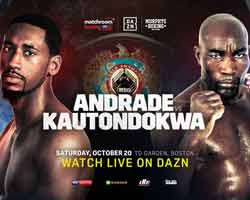 Review by AllTheBestFights.com: 2018-10-20, fight not so exciting between Demetrius Andrade and Walter Kautondokwa: it gets two stars.

Both undefeated, the Olympian and former Wba and Wbo light-Mw champion Demetrius Andrade entered this fight with a perfect boxing record of 25-0-0 (16 knockouts) and he is ranked as the No.6 middleweight in the world (currently the #1 in this division is Saul ‘Canelo’ Alvarez) while his opponent, Walter Kautondokwa (who replaces Billy Joe Saunders that failed a drug test), has an official record of 17-0-0 (16 KOs=94%) and he entered as the No.17 in the same weight class. In their last three fights Andrade has beat Willie Nelson (Andrade vs Nelson), Jack Culcay (Andrade vs Culcay) and Alantez Fox (Demetrius Andrade vs Alantez Fox) while Kautondokwa has won over Obodai Sai, Meshack Mwankemwa and Billi Facundo Godoy. Andrade vs Kautondokwa is valid for the vacant WBO World middleweight title. Watch the video and rate this fight!