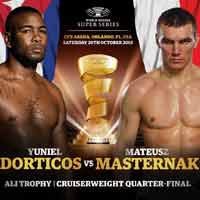 Review by AllTheBestFights.com: 2018-10-20, close and tough fight between Yuniel Dorticos and Mateusz Masternak: it gets three stars.

The former Wba Cw champion Yuniel Dorticos entered this fight with a professional boxing record of 22-1-0 (21 knockouts) and he is ranked as the No.10 cruiserweight in the world but he comes off his first loss, suffered against Murat Gassiev in February (Murat Gassiev vs Yunier Dorticos). Before this bout, between 2016 and 2017, he had beat Youri Kayembre Kalenga (Kalenga vs Dorticos) and Dmitry Kudryashov (Dorticos vs Kudryashov).
His opponent, Mateusz Masternak, has an official record of 41-4-0 (28 knockouts) and he entered as the No.13 in the same weight class. He lost to Tony Bellew in 2015 (Bellew vs Masternak) but since then he has won five bouts defeating Stivens Bujaj and Youri Kayembre Kalenga in his last two (Mateusz Masternak vs Youri Kayembre Kalenga 2). Dorticos vs Masternak is the quarter-final of the World Boxing Super Series cruiserweight tournament (WBSS – Muhammad Ali Trophy) and it is on the undercard of Emmanuel Rodriguez vs Jason Moloney. Watch the video and rate this fight!