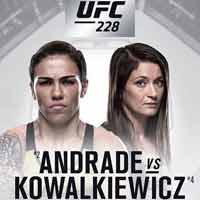 Review by AllTheBestFights.com: 2018-09-08, tough exchanges with a nice finish: Jessica Andrade vs Karolina Kowalkiewicz gets three stars (UFC Performance of the Night).

Jessica Andrade entered this fight with a professional record of 18-6-0 (67% finishing rate) and she is ranked as the No.2 women’s strawweight in the world. ‘Bate Estaca’ Andrade lost to Joanna Jedrzejczyk last year (Jedrzejczyk vs Andrade) but then she has beat Claudia Gadelha (Claudia Gadelha vs Jessica Andrade) and Tecia Torres (Jessica Andrade vs Tecia Torres).
Her opponent, the former Ksw Flw champion Karolina Kowalkiewicz, has a mma record of 12-2-0 (25% finishing rate) and she entered as the No.6 in the same weight class. She suffered two consecutive defeats between 2016 and 2017, against Joanna Jędrzejczyk (Jedrzejczyk vs Kowalkiewicz) and Claudia Gadelha (Gadelha vs Kowalkiewicz), but then she has won over Jodie Esquibel (Karolina Kowalkiewicz vs Jodie Esquibel) and Felice Herrig. Andrade vs Kowalkiewicz is on the undercard of Tyron Woodley vs Darren Till – UFC 228. Watch the video and rate this fight!

(Free embeddable video hosted on Youtube and not uploaded by AllTheBestFights)
https://www.youtube.com/watch?v=NqL2ZVR_hPU