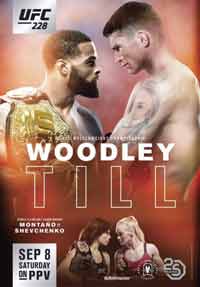 Review by AllTheBestFights.com: 2018-09-08, Zabit Magomedsharipov vs Brandon Davis gets three stars thanks to a good finish.

Zabit Magomedsharipov entered this fight with a mma record of 15-1-0 (80% finishing rate) and he is ranked as the No.27 featherweight in the world. He suffered his only loss when he faced Igor Egorov in 2013, since then he has won eleven consecutive bouts beating Mike Santiago, Sheymon da Silva Moraes (Zabit Magomedsharipov vs Sheymon da Silva Moraes) and Kyle Bochniak in his last three (Zabit Magomedsharipov vs Kyle Bochniak).
His opponent, Brandon Davis, has an official record of 9-4-0 (56% finishing rate) and he entered as the No.158 in the same weight class but he lost two out of his last three bouts, against Kyle Bochniak and Enrique Barzola; between these two fights he beat Steven Peterson. Zabit vs Davis is on the undercard of Tyron Woodley vs Darren Till – UFC 228. Watch the video and rate this fight!

(Free embeddable video hosted on Youtube or Dailymotion and not uploaded by AllTheBestFights)
https://www.dailymotion.com/video/x6tdzc0