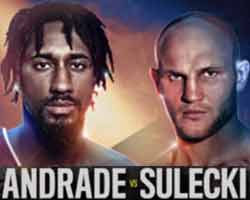 Review by AllTheBestFights.com: 2019-06-29, disappointing fight between Demetrius Andrade and Maciej Sulecki: it gets two stars.

The undefeated Olympian, world champion in two different weight classes Demetrius Andrade entered this fight with a perfect boxing record of 27-0-0 (17 knockouts) and he is ranked as the No.7 middleweight in the world (currently the #1 in this division is Saul ‘Canelo’ Alvarez). In his last three fights he has beat Alantez Fox (Demetrius Andrade vs Alantez Fox), Walter Kautondokwa (Demetrius Andrade vs Walter Kautondokwa) and Artur Akavov (Demetrius Andrade vs Artur Akavov).
His opponent, Maciej Sulecki, has an official record of 28-1-0 (11 knockouts) and he entered as the No.10 in the same weight class. He lost his first pro bout last year, against Daniel Jacobs (Daniel Jacobs vs Maciej Sulecki) but then he has beat Jean Michel Hamilcaro and Gabriel Rosado (Maciej Sulecki vs Gabriel Rosado). Andrade vs Sulecki is valid for the WBO World middleweight title (Andrade’s second defense). Watch the video and rate this fight!