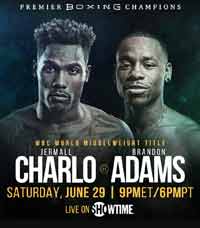 Review by AllTheBestFights.com: 2019-06-29, pretty good fight between Claudio Marrero and Eduardo Ramirez: it gets three stars.

The former Ibo and interim Wba Fw champion Claudio Marrero entered this fight with a record of 23-3-0 (17 knockouts) and he is ranked as the No.16 featherweight in the world but he lost two out of his last three bouts, against Jesus M Rojas (Claudio Marrero vs Jesus M Rojas) and Tugstsogt Nyambayar (Tugstsogt Nyambayar vs Claudio Marrero); between these two bouts he beat Jorge Lara.
His opponent, Eduardo Ramirez, has an official boxing record of 22-1-3 (9 knockouts) and he entered as the No.23 in the same weight class. He was defeated by Lee Selby in 2017 (Lee Selby vs Eduardo Ramirez) but then he has won over Carlos Jacobo and Bryan De Gracia. Marrero vs Ramirez is on the undercard of Jermall Charlo vs Brandon Adams. Watch the video and rate this fight!