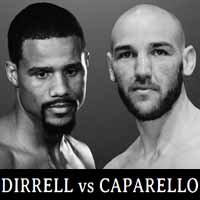 Review by AllTheBestFights.com: 2016-04-29, fight not so exciting between Andre Dirrell and Blake Caparello: it gets two stars.

Andre Dirrell entered this fight with a professional record of 24-2-0 (16 knockouts) and he is ranked as the No.11 super middleweight in the world but he comes off the loss against James DeGale (=DeGale vs Dirrell).
His opponent, Blake Caparello, has an official boxing record of 22-1-1 (6 knockouts) and he entered as the No.22 in the same weight class. His only loss occurred when he faced Sergey Kovalev in 2014 (=Kovalev vs Caparello), since then he has won three consecutive bouts. Dirrell vs Caparello is the main event of the evening. Watch the video and rate this fight!