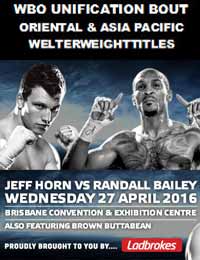 Review by AllTheBestFights.com: 2016-04-27, some good exchanges between Jeff Horn and Randall Bailey but it is not enough to get three stars: it gets two.

The undefeated Jeff Horn entered this fight with a professional boxing record of 13-0-1 (8 knockouts) and he is ranked as the No.17 welterweight in the world. The only man who stopped him in a draw was Rivan Cesaire in 2013, since then he has collected 10 victories taking revenge on Cesaire in 2014 and beating Ahmed El Mousaoui in his last bout.
His opponent, the former world champion in two different weight divisions Randall Bailey, has an official record of 46-8-0 (39 KOs=85%) and he entered as the No.42 in the same weight class. He suffered his last loss when he faced Devon Alexander in 2012 (= Alexander vs Bailey), after this bout he has won three fights. Horn vs Bailey is valid for the vacant WBO and IBF Inter-Continental welterweight titles. Watch the video and rate this fight!