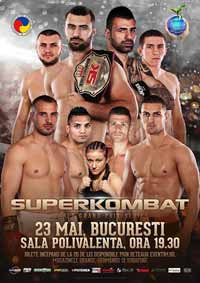 Review by AllTheBestFights.com: 2015-05-23, pretty good fight between Andrei Stoica and Thomas Alizier: it gets three stars.

The SuperKombat super-Cw champion Andrei Stoica entered this fight with a professional kickboxing record of 36-6-0 (23 knockouts) and he is ranked as the No.8 super cruiserweight in the world. He suffered his last defeat in 2014 when he faced Danyo Ilunga (=Ilunga vs Stoica), after this bout he has won four consecutive fights beating Marcello Adriaansz in his last fight (Stoica vs Adriaansz).
His opponent, the 2014 WMF gold medalist (-91 kg/200 lb) and ISKA European Hw K-1 champion Thomas Alizier, has an official record of 34-7-1 (14 knockouts) and he entered as the No.3 cruiserweight; he won over Miroslav Stverak in his last fight. Stoica vs Alizier is on the undercard of Ciprian Schiopu vs Giuseppe de Domenico – SuperKombat WGP II 2015. Watch the video and rate this fight!