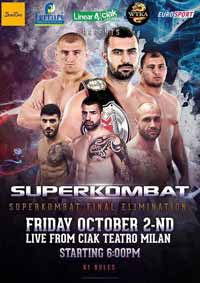 Review by AllTheBestFights.com: 2015-10-02, tough fight but not so exciting: Andrei Stoica vs Pavel Voronin gets two stars.

Andrei Stoica entered this fight with a pro kickboxing record of 39-6-0 (25 knockouts) and he is ranked as the No.7 super cruiserweight in the world while his opponent, Pavel Voronin, has a record of 14-6-1 (9 knockouts). Stoica lost to Danyo Ilunga in 2014 (=Ilunga vs Stoica) but then he has collected seven consecutive victories winning over Fred Sikking in his last one (=Stoica vs Sikking). Stoica vs Voronin is on the undercard of Catalin Morosanu vs Tomasz Czerwinski. Watch the video and rate this fight!