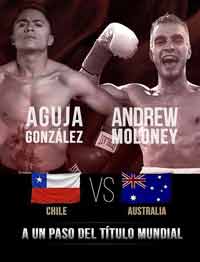 Review by AllTheBestFights.com: 2019-03-22, good fight between Andrew Moloney and Miguel Gonzalez: it gets three stars.

The undefeated Andrew Moloney entered this fight with a perfect record of 18-0-0 (11 knockouts) and he is ranked as the No.8 super flyweight in the world (currently the #1 in this division is Srisaket Sor Rungvisai). In his last three fights he has won over Rene Dacquel (Andrew Moloney vs Rene Dacquel), Richard Claveras and Luis Concepcion (Andrew Moloney vs Luis Concepcion).
His opponent, Miguel Gonzalez, has an official boxing record of 29-1-0 (6 knockouts) and he entered as the No.51 in the same weight class. He suffered his only loss when he faced Paul Butler in 2013, since then he has won twelve consecutive bouts beating Sammy Reyes, Michell Banquez and Yader Cardoza in 2018. Moloney vs Gonzalez, WBA World super flyweight title eliminator, is the main event of the evening. Watch the video and rate this fight!