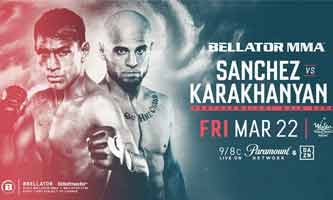 Review by AllTheBestFights.com: 2019-03-22, disappointing fight between Emmanuel Sanchez and Georgi Karakhanyan 2: it gets two stars.

Emmanuel Sanchez entered this fight with a professional mma record of 17-4-0 (47% finishing rate) and he is ranked as the No.15 featherweight in the world but he comes off the loss against Patricio Freire (Patricio Freire vs Emmanuel Sanchez); before this bout, in 2018, he had beat Sam Sicilia (Emmanuel Sanchez vs Sam Sicilia).
His opponent, the black belt in Brazilian jiu-jitsu Georgi Karakhanyan, has an official record of 28-8-1 (75% finishing rate) and he entered as the No.33 in the same weight class. He fought three times last year losing to Henry Corrales and beating Alexey Polpudnikov while his last bout, with Timur Nagibin, ended in a not contest. In their first fight Sanchez had beat Karakhanyan via majority decision (January 21, 2017 – Georgi Karakhanyan vs Emmanuel Sanchez I); this second bout is the main event of Bellator 218. Watch the video and rate this fight!