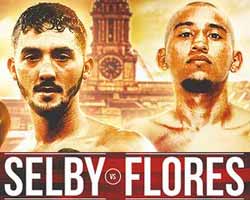 Review by AllTheBestFights.com: 2017-10-07, great performance by both boxers: Andrew Selby vs Maximino Flores gets three stars.

The undefeated Andrew Selby entered this fight with a perfect record of 9-0-0 (5 knockouts) and he is ranked as the No.7 flyweight in the world (currently the #1 in this division is Donnie Nietes). He has already fought twice in 2017 winning over Ardin Diale (=Selby vs Diale) and Cristofer Rosales (=Selby vs Rosales).
His opponent, Maximino Flores, has an official boxing record of 23-3-1 (16 knockouts) and he entered as the No.13 in the same weight class. He lost to Milan Melindo last year but then he has collected four victories and one draw. Andrew Selby vs Maximino Flores is the main event of the evening. Watch the video and rate this fight!