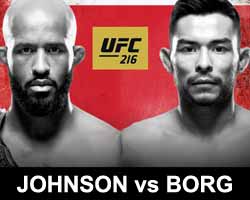 Review by AllTheBestFights.com: 2017-10-07, some good exchanges and a spectacular finish: Demetrious Johnson vs Ray Borg gets three stars (UFC Performance of the Night).

The Ufc Flw champion Demetrious Johnson entered this fight with a pro mma record of 26-2-1 (58% finishing rate) and he is ranked as the No.1 flyweight in the world. ‘Mighty Mouse’ suffered his last loss when he faced Dominick Cruz in 2011 (= Cruz vs Johnson), since then he has collected one draw and twelve consecutive victories beating Henry Cejudo (=Johnson vs Cejudo), Tim Elliott (=Johnson vs Elliott) and Wilson Reis in his last three (=Johnson vs Reis).
His opponent, Ray Borg, has a record of 11-2-0 (64% finishing rate) and he entered as the No.4 in the same weight class. He lost to Justin Scoggins last year (=Borg vs Scoggins) but then he has won over Louis Smolka (=Smolka vs Borg) and Jussier Formiga da Silva (=Formiga vs Borg). Demetrious Johnson vs Ray Borg is valid for the UFC flyweight title and it is on the undercard of Tony Ferguson vs Kevin Lee – UFC 216. Watch the video and rate this fight!

(Free embeddable video hosted on Youtube and not uploaded by AllTheBestFights)
https://www.youtube.com/watch?v=Ld6ykHFK2UY