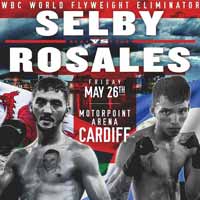 Review by AllTheBestFights.com: 2017-05-26, good performance by both boxers: Andrew Selby vs Cristofer Rosales gets three stars.

The undefeated Andrew Selby entered this fight with a perfect boxing record of 8-0-0 (5 knockouts) and he is ranked as the No.11 flyweight in the world. In his last three fight he has beat Felix Moncada, Jake Bornea and Ardin Diale (=Selby vs Diale).
His opponent, Cristofer Rosales, has an official record of 23-2-0 (15 knockouts) and he entered as the No.15 in the same weight class. He suffered his last loss when he faced Khalid Yafai in 2015, since then he has collected 13 consecutive victories beating Sammy Reyes, Sebastian Sanchez and Eliecer Quezada in 2017. Andrew Selby vs Cristofer Rosales is the main event of the evening. Watch the video and rate this fight!