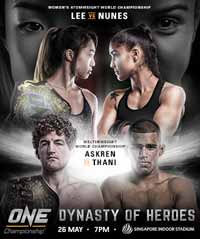 Review by AllTheBestFights.com: 2017-05-26, one sided fight between Ben Askren and Agilan Thani: it gets two stars.

Both undefeated, the former Bellator Ww and current ONE FC champion Ben Askren entered this fight with a perfect mma record of 15-0-0 (53% finishing rate) and he is ranked as the No.50 welterweight in the world while his opponent, Agilan Thangalapani, has an official record of 7-0-0 (100% finishing rate). Askren fought just once last year beating Nikolay Aleksakhin (=Askren vs Aleksakhin) while ‘Alligator’ Thani fought three times in 2016 and once in 2017 winning over Jeff Huang. Ben Askren vs Agilan Thani is valid for the ONE welterweight title (Askren’s second defense); undercard of Angela Lee vs Istela Nunes – ONE FC 55. Watch the video and rate this fight!

Event: ONE Championship: Dynasty of Heroes