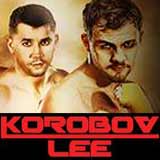 Review: 2014-12-13, some good exchanges between Matt Korobov and Andy Lee but it is not enough to get three stars: it gets two. The undefeated Matt Korobov entered this fight with a perfect boxing record of 24-0-0 (14 knockouts) and he is ranked as the No.9 middleweight in the world (currently the #1 in this division is Gennady Golovkin); he has fought twice in 2014 beating Emil Gonzalez and Jose Uzcategui (=Korobov vs Uzcategui).
His opponent, Andy Lee, has a record of 33-2-0 (23 knockouts) and he entered as the No.15 light middleweight, he suffered his last defeat in 2012 when he faced Julio Cesar Chavez Jr (=Chavez Jr vs Lee), since then he has collected five consecutive victories, the last one against John Jackson (=Lee vs Jackson). Korobov vs Lee is valid for the vacant WBO middleweight title; undercard of Timothy Bradley vs Diego Chaves. Watch the video and rate this fight!