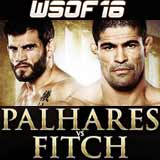 Review: 2014-12-13, Rousimar Palhares vs Jon Fitch gets three stars thanks to a good finish. The black belt in Brazilian jiu-jitsu Rousimar Palhares entered this fight with a professional mma record of 16-6-0 (81% finishing rate) and he is ranked as the No.12 welterweight in the world, he suffered his last defeat in 2012 when he faced Hector Lombard (=Lombard vs Palhares) but then he came back to win beating Mike Pierce (his last Ufc fights, Pierce vs Palhares) and Steve Carl (winning the Wsof Ww belt, Carl vs Palhares).
His opponent, Jon Fitch, has an official record of 26-6-1 (38% finishing rate) and he entered as the No.18 in the same weight class, he fought in the Ufc as well but after losing to Demian Maia in 2013 he was released from the promotion (=Fitch vs Maia) and he signed with World Series of Fighting. Here he lost the first bout, against Josh Burkman (=Fitch vs Burkman 2), but then he defeated Marcelo Alfaya (=Fitch vs Alfaya) and Dennis Hallman. ‘Toquinho’ Palhares vs Fitch, main event of Wsof 16, is valid for the WSOF welterweight title (Palhares’s first defense). Watch the video and rate this fight!

Video:
(Free embeddable highlights video hosted on Youtube and not uploaded by AllTheBestFights, to report it please visit this link where the video is hosted)