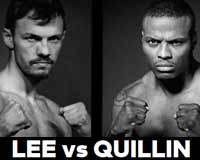 Review by AllTheBestFights.com: 2015-04-11, close fight with some nice exchanges but sometimes also boring, however, Andy Lee vs Peter Quillin gets three stars.

Andy Lee entered this fight with a pro boxing record of 34-2-0 (24 knockouts) and he is ranked as the No.6 middleweight in the world (currently the #1 in this division is Gennady Golovkin). The last time he lost was in 2012 when he faced Julio Cesar Chavez Jr (=Chavez Jr vs Lee), since then he has won six consecutive bouts winning the vacant WBO Mw title in his last fight, against Matt Korobov (=Korobov vs Lee).
His opponent, the undefeated Peter Quillin, has a perfect record of 31-0-0 (22 knockouts) and he entered as the No.3 in the same weight class. He won the Wbo Mw title in 2012, against Hassan N’Dam N’Jikam (=N’Dam vs Quillin) and then defended his belt three times, the last one with Lukas Konecny (=Quillin vs Konecny). Quillin vs Lee was scheduled as a middleweight bout but Quillin weighed in 0,6 pounds over the limit of 160 lbs making the bout a non-title fight; undercard of Danny Garcia vs Lamont Peterson. Watch the video and rate this fight!