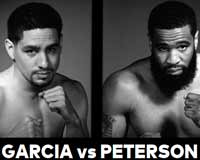 Review by AllTheBestFights.com: 2015-04-11, some good exchanges in the second part of the fight but sometimes they look like two “runners” and not two boxers…Danny Garcia vs Lamont Peterson gets two stars.

The undefeated Danny Garcia entered this fight with a perfect boxing record of 29-0-0 (17 knockouts) and he is ranked as the No.1 super lightweight in the world. He has won the Wbc world title against Erik Morales in 2012 (=Garcia vs Morales) and after four months he has also won the Wba belt with Amir Khan (=Garcia vs Khan). After defending both titles four times, the last time against Mauricio Herrera (=Garcia vs Herrera), ‘Swift’ Garcia faced and beat Rod Salka in a non-title bout (at 142-pound catchweight, Garcia vs Salka).
His opponent, the former Wba light-Ww world champion Lamont Peterson, has an official record of 33-2-1 (17 knockouts) and he entered as the No.4 in the same weight class. He suffered his last defeat in 2013 when he faced Lucas Matthysse (=Peterson vs Matthysse) but after this bout he has won the Ibf world belt against Dierry Jean (=Peterson vs Jean) and defended it once with Edgar Santana (=Peterson vs Santana). Garcia vs Peterson is the main event of the evening but both the Garcia’s Wbc and Wba titles plus Peterson’s Ibf are not on the line! Watch the video and rate this fight!