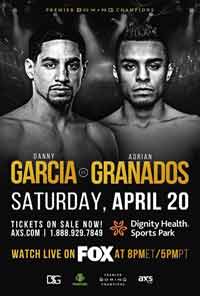 Review by AllTheBestFights.com: 2019-04-20, fight not particularly good between Andy Ruiz Jr and Alexander Dimitrenko: it gets two stars.

Andy Ruiz Jr entered this fight with a record of 31-1-0 (20 knockouts) and he is ranked as the No.19 heavyweight in the world. He suffered his only loss when he faced Joseph Parker in 2016 (via majority decision, Joseph Parker vs Andy Ruiz Jr), after this bout he has beat Devin Vargas and Kevin Johnson.
His opponent, Alexander Dimitrenko, has a boxing record of 41-4-0 (26 knockouts) and he entered as the No.38 in the same weight class but he comes off the loss against Bryant Jennings (Bryant Jennings vs Alexander Dimitrenko); before this bout, in 2017, he had won over Milos Dovedan, Adrian Granat (Granat vs Dimitrenko) and Miljan Rovcanin (Alexander Dimitrenko vs Miljan Rovcanin). Ruiz vs Dimitrenko is on the undercard of Danny Garcia vs Adrian Granados. Watch the video and rate this fight!