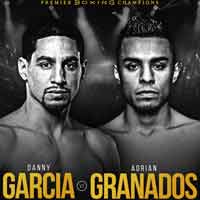 Review by AllTheBestFights.com: 2019-04-20, good fight between Danny Garcia and Adrian Granados: it gets three stars.

The former world champion in two different weight classes Danny Garcia entered this fight with a professional record of 34-2-0 (20 knockouts) and he is ranked as the No.5 welterweight in the world (currently the #1 in this division is Terence Crawford) but he lost two out of his last three fights, against Keith Thurman in 2017 (via split decision Keith Thurman vs Danny Garcia) and with Shawn Porter in 2018 (Danny Garcia vs Shawn Porter); between these two bouts he beat Brandon Rios (Danny Garcia vs Brandon Rios).
His opponent, Adrian Granados, has a boxing record of 20-6-2 (14 knockouts) and he entered as the No.22 in the same weight class. He lost two consecutive fights in 2017, against Adrien Broner (via split decision, Broner vs Granados) and Shawn Porter (Shawn Porter vs Adrian Granados), but then he has collected one no-contest and two victories. Garcia vs Granados is valid for the vacant WBC Silver welterweight title. Watch the video and rate this fight!