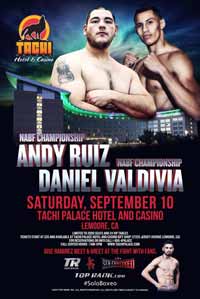 Review by AllTheBestFights.com: 2016-09-10, fight not particularly good between Andy Ruiz Jr and Franklin Lawrence: it gets two stars.

The undefeated Andy Ruiz Jr entered this fight with a perfect record of 28-0-0 (19 knockouts) and he is ranked as the No.29 heavyweight in the world. He has fought twice in 2016 winning over Ray Austin and Josh Gormley.
His opponent, the 40-year-old Franklin Lawrence (13 years older than Ruiz), has an official record of 21-2-2 (16 KOs=76%) and he entered as the No.54 in the same weight class. He suffered his last loss when he faced Oliver McCall in 2009, since then he has collected nine consecutive victories beating Grover Young in his last one. Ruiz vs Lawrence is valid for the NABF heavyweight title. Watch the video and rate this fight!