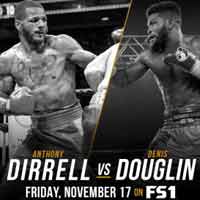 Review by AllTheBestFights.com: 2017-11-17, disappointing fight between Anthony Dirrell and Denis Douglin: it gets two stars.

The former Wbc super-Mw champion Anthony Dirrell entered this fight with a professional boxing record of 30-1-1 (24 knockouts) and he is ranked as the No.11 super middleweight in the world. He suffered his only loss when he faced Badou Jack in 2015 (=Dirrell vs Jack), after this bout he has won over Marco Antonio Rubio (=Dirrell vs Rubio), Caleb Truax (=Dirrell vs Truax) and Norbert Nemesapati (=Dirrell vs Nemesapati).
His opponent, Denis Douglin, has an official record of 20-5-0 (13 knockouts) but he is not ranked as he hasn’t fought since August 5, 2016 when he was defeated by David Benavidez; before this bout he had beat Cameron Allen, Marcos Primera and Marcus Upshaw in 2015. Dirrell vs Douglin is the main event of the evening. Watch the video and rate this fight!

Report broken video
« 2017 K-1 MUAY THAI fight – Superbon Banchamek vs Davit Kiria – full fight Video Kunlun Fight 67
2017 best BOXING fight – Zolani Tete vs Siboniso Gonya – full fight Video WBO »
HELP US!!! Since the CORONAVIRUS pandemic started, AllTheBestFights.com has struggled to survive! If you have enjoyed this website for the past 10 years, today we ask you for a little help: