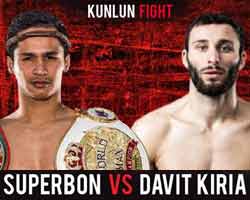 Review by AllTheBestFights.com: 2017-11-12, fight not so exciting between Superbon Banchamek and Davit Kiria: it gets two stars.

Superbon Banchamek entered this fight with a professional kickboxing record of 98-33-0 (24 knockouts) and he is ranked as the No.1 super welterweight in the world. He lost to Sitthichai in January 2016 but since then he has won eleven consecutive bouts taking revenge on Sitthichai (=Sitthichai vs Superbon 2) and defeating Mohamed Khamal in his last one.
His opponent, the black belt in karate and former Glory Lw champion Davit Kiria, has an official record of 29-15-0 (14 knockouts) and he entered as the No.11 in the same weight class. He has already fought five times in 2017 losing twice, with Jomthong Chuwattana and Marouan Toutouh, but after this bout he has taken revenge on Toutouh. Superbon vs Kiria is the quarter final of the Kunlun Fight 70kg world championship tournament; undercard of Buakaw Banchamek vs Marouan Toutouh – Kunlun Fight 67. Watch the video and rate this fight!