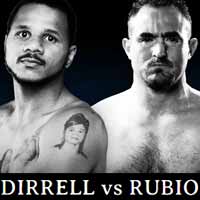 Anthony Dirrell entered this fight with a boxing record of 27-1-1 (22 KOs=81%) and he is ranked as the No.14 super middleweight in the world while his opponent, the former Wbc interim Mw champion Marco Antonio Rubio, has an official record of 59-7-1 (51 KOs=86%) and he entered as the No.14 middleweight. Both boxers have lost their last bout: Dirrell suffered his first professional defeat against Badou Jack losing also his Wbc super-Mw title (=Dirrell vs Jack) while ‘Veneno’ Rubio lost to Gennady Golovkin (=Golovkin vs Rubio). Dirrell vs Rubio is the main event of the evening. Watch the video and rate this fight!