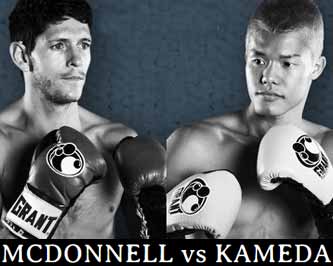 Jamie McDonnell entered this fight with a pro boxing record of 26-2-1 (12 knockouts) and he is ranked as the No.3 bantamweight in the world (currently the #1 in this division is Shinsuke Yamanaka). He suffered his two defeats between 2007 and 2008, against Chris Edwards and Lee Haskins, but since then he has collected 18 consecutive victories.
His opponent, the former Wbo bantamweight champion Tomoki Kameda, has a record of 31-1-0 (19 knockouts) and he entered as the No.4 in the same weight class but he comes off the loss against McDonnell during their first bout (Kameda vs McDonnell). McDonnell vs Kameda 2 is valid for the WBA World bantamweight (held by McDonnell); undercard of Anthony Dirrell vs Marco Antonio Rubio. Watch the video and rate this fight!