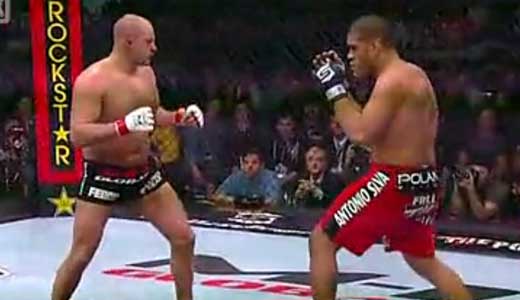 Review: Antonio Silva vs Fedor Emelianenko has been a good fight as everyone expected. Fedor have not fight for almost eight months (when he was defeated for the first time by Fabricio Werdum) and Strikeforce World Heavyweight Grand Prix tournament seemed the way to redeem himself and maybe find Werdum another time. But Fedor Emelianenko had to fight versus Antonio Bigfoot Silva, Brazilian fighter with a powerful physique and just two defeats, one with Pele and the other with Fabricio Werdum (unanimous decision). The first round between Fedor vs Silva is won by Emelianenko that seems to keep control of the fight, but in the second round Silva takes courage and brings to the ground Fedor that suffer the actions of the Brazilian throughout the round. The signs on the face of Fedor Emelianenko are obvious, so the doctor stopped the fight. Strikeforce World Heavyweight Grand Prix Tournament loses its main fighter and, as declared after the fight, this could have been the last cage fight of the great Fedor Emelianenko. Antonio Silva vs Fedor Emelianenko could enter in the history of MMA, a fight nice to see, very technical for the division of the two fighters. Watch the video!