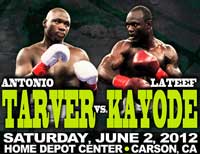 Review: 2012-06-02, pleasant fight between Antonio Tarver and Lateef Kayode but it is not enough to get three stars (fight ended by split decision). Antonio Tarver (29-6-0) entered as the No.2 cruiserweight in the world while the undefeated Lateef Kayode (18-0-0) entered as the No.8. Tarver vs Kayode is valid for the IBO cruiserweight title (Tarver’s first defense). Watch the video!