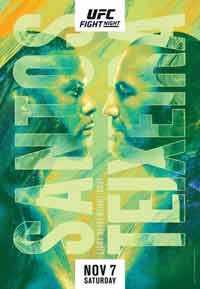 Review by AllTheBestFights.com: 2020-11-07, disappointing fight between Andrei Arlovski and Tanner Boser: it gets two stars.
The former Ufc Hw champion Andrei Arlovski entered this fight with a mma record of 29-19-0 (69% finishing rate) and he is ranked as the No.27 heavyweight in the world. He lost to Jairzinho Rozenstruik last year but he came back to win against Philipe Lins in May 2020 (Andrei Arlovski vs Philipe Lins).
His opponent, Tanner Boser, has an official record of 19-6-1 (63% finishing rate) and he entered as the No.36 in the same weight class. He was defeated by Ciryl Gane in 2019 but then he has won over Philipe Lins and Raphael Pessoa in 2020. Boser vs Arlovski is on the undercard of Thiago Santos vs Glover Teixeira – UFC Fight Night 182 (also known as UFC on ESPN+ 40 or UFC Vegas 13). Watch the video and rate this fight!