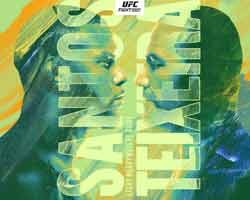 Review by AllTheBestFights.com: 2020-11-07, pretty good finish between Thiago Santos and Glover Teixeira but it is not enough to get three stars: it gets two.
The black belt in Brazilian jiu-jitsu Thiago Santos entered this fight with a pro mma record of 21-7-0 (76% finishing rate) but he is not ranked as he hasn’t fought since July 6, 2019 when he was defeated by Jon Jones (controversial split decision, Jon Jones vs Thiago Santos). Before this bout, Thiago ‘Marreta’ had defeated Jan Blachowicz (Jan Blachowicz vs Thiago Santos) and Jimi Manuwa (Jimi Manuwa vs Thiago Santos).
His opponent, the black belt in kajukenbo and Bjj Glover Teixeira, has a record of 31-7-0 (84% finishing rate) and he entered as the No.5 light heavyweight in the world. He lost to Corey Anderson in 2018 (Glover Teixeira vs Corey Anderson) but then he has won four bouts beating Nikita Krylov (Glover Teixeira vs Nikita Krylov) and Anthony Smith in his last two (Anthony Smith vs Glover Teixeira). Teixeira vs Santos is the main event of the UFC Fight Night 182 (also known as UFC on ESPN+ 40 or UFC Vegas 13). Watch the video and rate this fight!