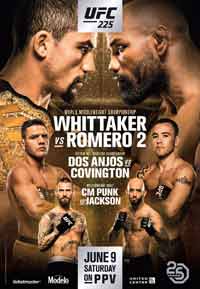 Review by AllTheBestFights.com: 2018-06-09, nice and tough exchanges between Andrei Arlovski and Tai Tuivasa: it gets three stars.

The former Ufc Hw champion Andrei Arlovski entered this fight with a professional record of 27-15-0 (74% finishing rate) and he is ranked as the No.12 heavyweight in the world but he lost five out of his last seven bouts, two in 2017: against Francis Ngannou (Arlovski vs Ngannou) and Marcin Tybura (Arlovski vs Tybura); after this fight he has won over Junior Albini (Andrei Arlovski vs Junior Albini) and Stefan Struve (Andrei Arlovski vs Stefan Struve).
His opponent, the undefeated Tai Tuivasa, has a perfect record of 7-0-0 (100% ko/tko victory rate – he has never won via submission) and he entered as the No.72 in the same weight class. In his last three bouts he has defeated James McSweeney, Rashad Coulter and Cyril Asker (Tai Tuivasa vs Cyril Asker). Arlovski vs Tuivasa is on the undercard of Robert Whittaker vs Yoel Romero 2 – UFC 225. Watch the video and rate this fight!

(Free embeddable video hosted on Youtube and not uploaded by AllTheBestFights)
https://www.youtube.com/watch?v=b1BSWlIJN_A