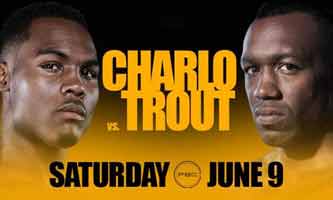 Review by AllTheBestFights.com: 2018-06-09, some good combinations between Jermell Charlo and Austin Trout but it is not enough to get three stars: it gets two.

The undefeated Wbc light-Mw champion Jermell Charlo entered this fight with a perfect boxing record of 30-0-0 (15 knockouts) and he is ranked as the No.2 super welterweight in the world (currently the #1 in this division is Jarrett Hurd). He fought twice last year winning over Charles Hatley (Charlo vs Hatley) and Erickson Lubin (Jermell Charlo vs Erickson Lubin).
His opponent, the former Wba light-Mw champion Austin Trout, has a record of 31-4-0 (17 knockouts) and he entered as the No.15 middleweight. He lost two consecutive bouts between 2016 and 2017, against Jermall Charlo (twin brother of Jermell, Jermall Charlo vs Austin Trout) and Jarrett Hurd (Jarrett Hurd vs Austin Trout), but he came back to win in 2018 with Juan De Angel. Charlo vs Trout is valid for the WBC World super welterweight title (Charlo’s third defense); undercard of Leo Santa Cruz vs Abner Mares 2. Watch the video and rate this fight!