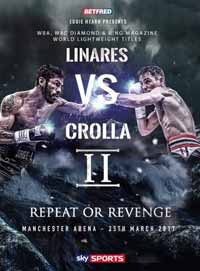 Review by AllTheBestFights.com: 2017-03-25, some good exchanges between Brian Rose and Jack Arnfield but it is not enough to get three stars: it gets two.

Brian Rose entered this fight with a boxing record of 29-4-1 (8 knockouts) and he is ranked as the No.17 middleweight in the world. He fought twice last year losing to Matthew Macklin (=Rose vs Macklin) and beating Stiliyan Kostov.
His opponent, Jack Arnfield, has an official record of 23-2-0 (6 knockouts) and he entered as the No.35 in the same weight class. He suffered his last defeat when he faced Nick Blackwell in 2015 (=Blackwell vs Arnfield), after this bout he has won four fights beating Mick Hall in 2017. Jack Arnfield vs Brian Rose is valid for the WBA International middleweight title; undercard of Jorge Linares vs Anthony Crolla 2. Watch the video and rate this fight!