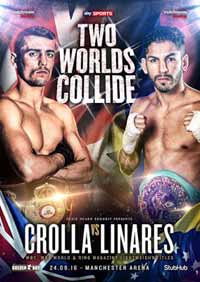 Review by AllTheBestFights.com: 2016-09-24, fight not particularly good between John Ryder and Jack Arnfield: it gets two stars.

John Ryder entered this fight with a pro boxing record of 23-2-0 (12 knockouts) and he is ranked as the No.26 middleweight in the world while his opponent, Jack Arnfield, has a record of 20-2-0 (5 knockouts) and he entered as the No.93 in the same weight class. Both boxers lost to Nick Blackwell last year, after the defeat Ryder has won three bouts beating Siarhei Khamitski and Robert Talarek in 2016 while Arnfield has defeated Alistair Warren. Ryder vs Arnfield is valid for the WBA International middleweight title; undercard of Anthony Crolla vs Jorge Linares. Watch the video and rate this fight!