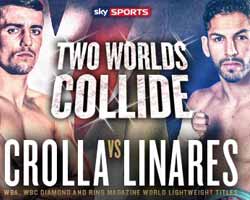 Review by AllTheBestFights.com: 2016-09-24, great fight between Jorge Linares and Anthony Crolla: it gets three stars.

The Wba champion Anthony Crolla entered this fight with a professional boxing record of 31-4-3 (13 knockouts) and he is ranked as the No.3 lightweight in the world (currently the #1 in this division is Rances Barthelemy). He suffered his last loss when he faced Gary Sykes in 2012 (via split decision), since then he has collected seven victories and three draws beating Darleys Perez (=Perez vs Crolla 2) and Ismael Barroso in his last two bouts (=Crolla vs Barroso).
His opponent, the world champion in three different weight classes Jorge Linares, has an official record of 40-3-0 (27 knockouts) and he entered as the No.4 in the same weight class. He suffered two consecutive defeats between 2011 and 2012, against Antonio DeMarco (=DeMarco vs Linares) and Sergio Thompson (=Linares vs Thompson), but then he has won nine consecutive fights winning the vacant Wbc Lw belt against Javier Prieto in 2014 (=Linares vs Prieto) and defending it twice in 2015: with Kevin Mitchell (=Mitchell vs Linares) and Ivan Cano (=Linares vs Cano). Crolla vs Linares is valid for the WBA World lightweight title. Watch the video and rate this fight!

Their next fight: Jorge Linares vs Anthony Crolla 2