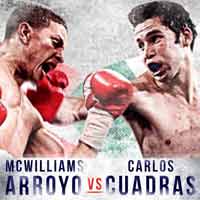 Review by AllTheBestFights.com: 2018-02-24, good fight between Carlos Cuadras and McWilliams Arroyo: it gets three stars.

The former Wbc super-Flw champion Carlos Cuadras entered this fight with a pro boxing record of 36-2-1 (27 KOs=75%) and he is ranked as the No.6 super flyweight in the world (currently the #1 in this division is Srisaket Sor Rungvisai) but he lost two out of his last three fights, against
Roman Gonzalez in 2016 (4-stars fight, Cuadras vs Gonzalez) and Juan Francisco Estrada in 2017 (Carlos Cuadras vs Juan Francisco Estrada); between these two bouts ‘Principe’ Cuadras beat David Carmona (Cuadras vs Carmona).
His opponent, the 2009 world amateur boxing champion McWilliams Arroyo, has a record of 16-3-0 (14 KOs=87%) but he is not ranked as he hasn’t fought since April 23, 2016 when he was defeated by Roman Gonzalez (Roman Gonzalez vs McWilliams Arroyo); before this bout, in 2015 he had beat Victor Ruiz. Cuadras vs Arroyo is valid for the vacant WBC Silver super flyweight title; undercard of Srisaket Sor Rungvisai vs Juan Francisco Estrada. Watch the video and rate this fight!