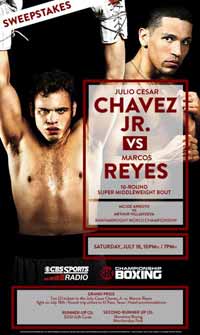 Review by AllTheBestFights.com: 2015-07-18, disappointing fight between McJoe Arroyo and Arthur Villanueva: it gets two stars.

Both undefeated, the Puerto Rican McJoe Arroyo entered this fight with a perfect boxing record of 16-0-0 (8 knockouts) and he is ranked as the No.8 super flyweight in the world while his opponent, Arthur Villanueva, has a record of 27-0-0 (14 knockouts) and he entered as the No.10 in the same weight class (currently the #1 in this division is Naoya Inoue). In their last bout Arroyo beat Mark Anthony Geraldo while Villanueva won over Julio Cesar Miranda. Arroyo vs Villanueva is valid for the vacant IBF World super flyweight title; undercard of Julio Cesar Chavez Jr vs Marcos Reyes. Watch the video and rate this fight!

Official highlights: (we have seen this fight but at the moment we have just found the video highlights. We will post the full fight as soon as we find it)