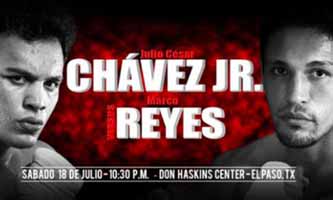 Review by AllTheBestFights.com: 2015-07-18, nice and tough fight between Julio Cesar Chavez Jr and Marcos Reyes: it gets three stars.

The former Wbc Mw champion Julio Cesar Chavez Jr entered this fight with a professional boxing record of 48-2-1 (32 knockouts) and he is ranked as the No.14 light heavyweight in the world but he comes off the loss against Andrzej Fonfara (=Chavez Jr vs Fonfara).
His opponent, Marcos Reyes, has an official record of 33-2-0 (24 knockouts) and he entered as the No.32 middleweight. He suffered his last defeat in 2014, against Abraham Han, but he came back to win in 2015 beating David Alonso Lopez. Chavez Jr vs Reyes is the main event of the evening. Watch the video and rate this fight!