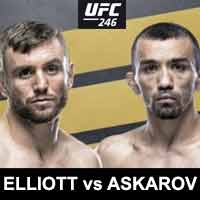 Review by AllTheBestFights.com: 2020-01-18, some good exchanges between Askar Askarov and Tim Elliott but it is not enough to get three stars: it gets two.

The undefeated Askar Askarov entered this fight with a record of 10-0-1 (100% finishing rate) and he is ranked as the No.8 flyweight in the world (currently the #1 in this division is Joseph Benavidez). In his last three fights he has beat Anthony Leone and Rasul Albaskhanov but then he has tied with Brandon Moreno (Brandon Moreno vs Askar Askarov).
His opponent, Tim Elliott, has a mma record of 15-9-1 (60% finishing rate) and he entered as the No.15 in the same weight class but he lost two out of his last three fights, against Ben Nguyen (Tim Elliott vs Ben Nguyen) and Deiveson Figueiredo (Deiveson Figueiredo vs Tim Elliott); between these two bouts he beat Mark De La Rosa. Askarov vs Elliott is on the undercard of Conor McGregor vs Donald Cerrone – UFC 246. Watch the video and rate this fight!