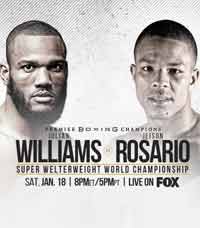 Review by AllTheBestFights.com: 2020-01-18, good fight between Julian Williams and Jeison Rosario: it gets three stars. This match was ranked in the ‘Top 10 Boxing Fights of the Year 2020‘ (ranking generated by our users).

The Ibf, Ibo and Wba super-Ww champion Julian Williams entered this fight with a pro boxing record of 27-1-1 (16 knockouts) and he is ranked as the No.3 super welterweight in the world (currently the #1 in this division is Jermell Charlo). He suffered his only loss when he faced Jermall Charlo in 2016 (Charlo vs Williams), since then he has won five bouts defeating Francisco Javier Castro and Jarrett Hurd in his last two (Jarrett Hurd vs Julian Williams).
His opponent, Jeison Rosario, has a record of 19-1-1 (13 knockouts) and he entered as the No.36 middleweight. He lost to Nathaniel Gallimore in 2017 but since then he has collected one draw and seven victories beating Mark Anthony Hernandez and Jorge Cota in 2019. Williams vs Rosario is valid for the WBA, IBF and IBO World super welterweight title (Williams’ first defense). Watch the video and rate this fight!

(Free embeddable video hosted on Youtube And not uploaded by AllTheBestFights)