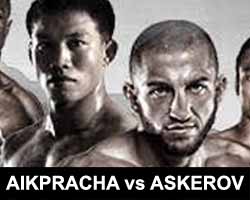 Review by AllTheBestFights.com: 2016-01-23, pretty good finish but it is not enough to get three stars: Aikpracha Meenayothin vs Dzhabar Askerov gets two.

The former Lumpinee and WMC welterweight champion Aikpracha Meenayothin entered this fight with a pro kickboxing record of 93-20-1 (66 knockouts) and he is ranked as the No.4 middleweight in the world. He suffered two consecutive losses last year, against Steve Moxon and Marat Grigorian (=Aikpracha vs Grigorian), but then he has won four bouts beating Sanny Dahlbeck in his last one.
His opponent, Dzhabar Askerov, has a record of 87-32-1 (43 knockouts) and he entered as the No.9 super welterweight. He fought four times in 2015 losing just his last bout, against Yodsanklai Fairtex (=Yodsanklai vs Askerov). Aikpracha vs Askerov is the main event of Kunlun Fight 37. Watch the video and rate this fight!