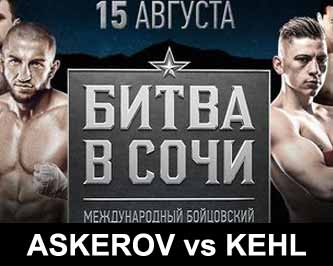 Review by AllTheBestFights.com: 2015-08-15, good fight between Dzhabar Askerov and Enriko Kehl: it gets three stars.

Dzhabar Askerov entered this fight with a professional kickboxing record of 85-31-1 (41 knockouts) while his opponent, the 2014 K-1 World Max champion Enriko Kehl, has an official record of 37-8-1 (27 knockouts) and he entered as the No.8 super welterweight in the world. Askerov lost to Cosmo Alexandre at the end of 2014 (=Askerov vs Alexandre 2) but he came back to win in 2015 beating Nonsai Sor Sanyakorn (=Askerov vs Nonsai 2) while Kehl has already fought three times in 2015 beating Erkan Varol (=Kehl vs Varol 2) and Mohamed Diaby (=Kehl vs Diaby) but between these two fights he lost to Giorgio Petrosyan (=Petrosyan vs Kehl). In the first fight between Askerov and Kehl, the Russian defeated the German on points (on December 22, 2012); this second fight is the semifinal of the Battle in Sochi -70kg 4 man tournament – Kunlun Fight 29 (they also faced each other a second time on May 17, 2019 – Dzhabar Askerov vs Enriko Kehl 3). Watch the video and rate this fight!