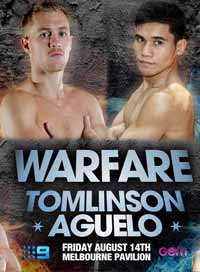 Review by AllTheBestFights.com: 2015-08-14, pretty good finish but the rest of the fight was quite boring: Lucas Browne vs Julius Long gets two stars.

The undefeated Lucas Browne entered this fight with a perfect boxing record of 22-0-0 (19 KOs=86%) and he is ranked as the No.22 heavyweight in the world while his opponent, Julius Long, has an official record of 16-18-0 (14 KOs=87%). In their last bout Browne defeated Chauncy Welliver (=Browne vs Welliver) while Long lost to Izuagbe Ugonoh. Browne vs Long is on the undercard of Will Tomlinson vs Adones Aguelo. Watch the video and rate this fight!

Where: The Melbourne Pavilion, Flemington, Australia