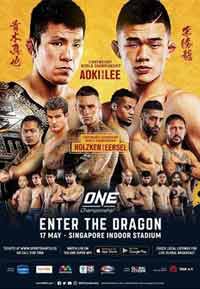 Review by AllTheBestFights.com: 2019-05-17, pretty good fight between Dzhabar Askerov and Enriko Kehl 3: it gets three stars.

Dzhabar Askerov entered this fight with a professional record of 107-35-2 (54 knockouts) but he won just one out of his last four bouts, against Ergali Urbulatov in 2018, after this fight he was defeated by Diego Freitas.
His opponent, the former K-1 World Max and Iska champion Enriko Kehl, has a kickboxing record of 48-14-2 (29 knockouts) and he entered as the No.10 super welterweight in the world. He lost to Yodsanklai Fairtex last year but then he has won over Jordan Watson, Mohammed El Mir and Liam Nolan. In both their previous bouts Askerov had beat Kehl, via unanimous decision in 2013 and via ko in 2015 (Dzhabar Askerov vs Enriko Kehl 2); this third fight is the quarter-final of the ONE Kickboxing featherweight Grand-Prix tournament and it is on the undercard of Shinya Aoki vs Christian Lee – ONE FC 96. Watch the video and rate this fight!