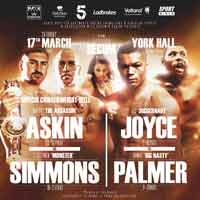 Review by AllTheBestFights.com: 2018-03-17, pretty good fight between Matthew Askin and Stephen Simmons: it gets three stars.

Matty Askin entered this fight with a pro record of 22-3-1 (14 knockouts) and he is ranked as the No.16 cruiserweight in the world. He suffered his last loss when he faced Ovill McKenzie in 2015 (Ovill McKenzie vs Matty Askin), since then he has collected one draw and five victories beating Craig Kennedy in 2017.
His opponent, Stephen Simmons, has an official boxing record of 18-2-0 (7 knockouts) and he entered as the No.49 in the same weight class. He lost to Noel Gevor in 2016 but then he has won over Arturs Kulikauskis, Lukasz Rusiewicz and Simon Barclay. Matthew Askin vs Simmons is valid for the BBBofC British cruiserweight title. Watch the video and rate this fight!