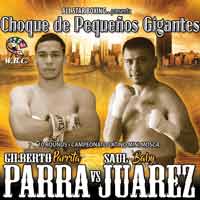 Review by AllTheBestFights.com: 2018-03-09, fight not so exciting between Gilberto Parra Medina and Saul Juarez: it gets two stars.

Gilberto Parra Medina entered this fight with a pro boxing record of 26-3-0 (21 KOs=81%) and he is ranked as the No.16 light flyweight in the world. ‘Parrita’ lost to Donnie Nietes in 2015 (Nietes vs Parra) but then he has won seven consecutive fights beating Mario Rodriguez, Jose Rivas and Leyman Benavides in his last three (Gilberto Parra Medina vs Leyman Benavides).
His opponent, Saul Juarez, has a record of 23-7-1 (12 knockouts) and he entered as the No.10 minimumweight but he comes off three consecutive losses, against Wanheng Menayothin (Wanheng Menayothin vs Saul Juarez), Leroy Estrada (Saul Juarez vs Leroy Estrada) and Gilberto Pedroza; he won his last fight in 2016 with Oswaldo Novoa (Saul Juarez vs Oswaldo Novoa 3). Parra vs Juarez is valid for the WBC Silver light flyweight title. Watch the video and rate this fight!