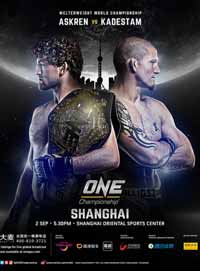 Review by AllTheBestFights.com: 2017-09-02, one sided fight between Ben Askren and Zebaztian Kadestam: it gets two stars.

The undefeated former Bellator Ww and current ONE FC champion Ben Askren entered this fight with a perfect mma record of 16-0-0 (56% finishing rate) and he is ranked as the No.31 middleweight in the world. He has fought twice between 2016 and 2017 beating Nikolay Aleksakhin (=Askren vs Aleksakhin) and Agilan Thani (=Askren vs Thani).
His opponent, Zebaztian Kadestam, has an official record of 9-3-0 (89% finishing rate) and he entered as the No.79 in the same weight class. He has already fought twice in 2017 losing to Juho Valamaa and defeating Luis Santos. Ben Askren vs Zebaztian Kadestam, main event of One Fc 59, is valid for the One Fc welterweight title. Watch the video and rate this fight!